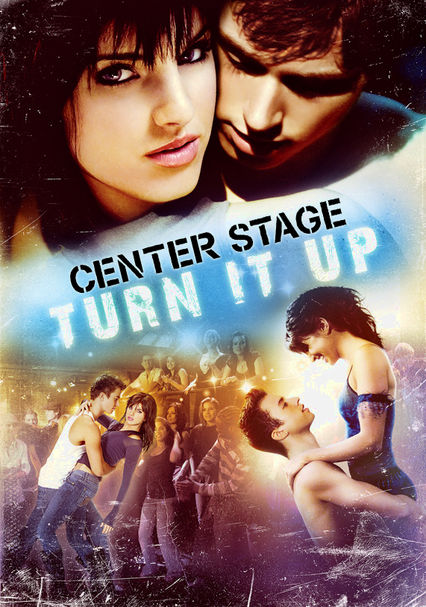 2008 PG-13 1h 35m DVD
Rejected by a prestigious ballet school, self-taught Kate questions whether she has what it takes to make it. But with the help of a former hockey player and some hip-hop inspiration, Kate realizes that she isn't ready to give up her dream.

Parents need to know That Center Stage: Turn it Up is a sequel to the teen-targeted dance romance Center Stage. The sequel involves fierce competition at a ballet academy, and tackles dating conflict, implied sex between consenting adults, frequent kissing and romantic overtones, nightlife, and some sensuality and suggestiveness, particularly in the dance routines. There is brief strong language. It's also often set against the backdrop of a nightclub, though it shows no underage or even indulgent drinking. It offers a wealth of positive messages about hard work and ambition and personal responsibility, and shows young adults behaving responsibly in spite of the temptations of night life, but its mature themes and romanticizing of city life make it best for older kids.

The main couple often dances together in sensual or suggestive ways. They also kiss frequently, and in two scenes there is implied intercourse -- one, when they are dancing together, then shown following one another into the bedroom. Later, a shot has them in bed (only the male shirtless) eating ice cream, presumably after sleeping together. In another scene, they wake up together. In one scene, there are mature themes that also involve the implication of possible sex, such as when it's implied that a female dancer is about to leave a club and go home with a teacher at the academy, though she changes her mind because she decides it "isn't right." Elsewhere, there is flirtation and a few night club scenes that involve dancing suggestively.

Brief profanity is used, such as "I don't have a giant stick up my ass," or "I'm just shooting the s--t." In one scene, a male dancer says "What the f--k" when he drops a dancer.

Center Stage: Turn it Up offers strongly positive messages about believing in yourself against the odds, and the notion that hard work and accountability can pay off.

Many scenes occur in a nightclub where adults are served alcoholic beverages. There are a few formal events where champagne or wine is served. In all cases, no one is shown drinking to excess or underage, but alcohol is a consistent presence in the film's backdrop.