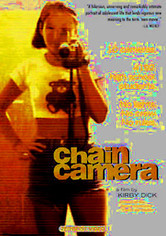 2001 NR 1h 24m DVD
Award-winning director Kirby Dick gave video cameras to 10 students to record their lives at Los Angeles's John Marshall High School (the same high school used in the filming of Grease and Buffy the Vampire Slayer) -- with no limitations on what they could shoot. After one week, the cameras were given to 10 new students, and so on, forming a virtual chain letter and a portrait of young America at the turn of the 21st century.