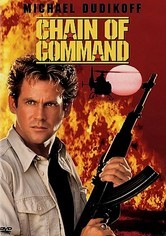 1994 R 1h 37m DVD
Anti-terrorist operative Merrill Ross (Michael Dudikoff) gets caught in the middle of a deadly international conflict in this explosive adventure. Danger lurks around every corner as Ross tries to thwart a plot to seize control of Qumir and its oil fields. Tailed by agents and a death squad, Ross dodges bullets and barely survives an oil depot blast as he tries to find out who's behind the mercenary scheme. Todd Curtis co-stars.