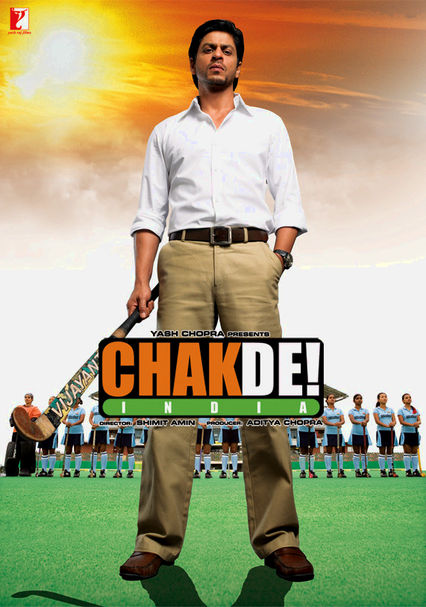 2007 NR 2h 20m DVD
Years after facing humiliating defeat on the field, a former field hockey star returns to the game as coach of the Indian women's national hockey team, striving to shape a ragtag bunch of female athletes into a playing force to be reckoned with.

Parents need to know that Chak De! India is a feel-good underdog sports movie featuring girl athletes from India overcoming sexism and some racism to compete and excel. There's a little fighting (the girls get the upper hand), some sexual innuendo, and big plugs for McDonald's and Puma. A sprinkling of strong language doesn't go beyond the "s--t" in subtitles. You don't need to know much about field hockey to enjoy this movie, but you do need to be a fast enough reader to keep up with the subtitles.

Sexist banter and cat-calls, especially toward the Indian women who look more Chinese; they're asked, "How much for those melons?" One girl athlete makes a clumsy seduction attempt toward her coach that goes nowhere. One player is seen in bed with her boyfriend but they mostly talk onscreen.

The girl athletes beat up sexist boys at a food court -- the soundtrack-heavy fight is meant to be comical but boys are ganged up on and hit with sticks and other objects. Girls get some bloody injuries in a few matches and one girl is instructed to rough up an aggressive team with lots of tripping and running them down. The coach raises his hand to one of his players like he's ready to strike her, then doesn't. Objects are burned in protest after a lost game.

There's plenty here about overcoming racism and sexism. There's also a poke at the media spin and what impact it can have, here turning a heroic sports figure into a traitor in his country's eyes. The coach says, "it's not strength but spirit that makes a team." Unfortunately he tries to unify and bring out the spirit in his team by letting them beat up some sexist boys in a food court.

A big scene takes place at McDonald's. As the girls progress in the tournament they get a big Puma sponsorship; a ton of Puma boxes arrive and the girls, in awe, dig in.

Girls are offered drinks at a reception.