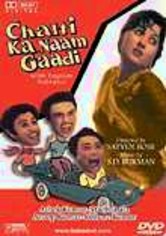 1958 NR 2h 43m DVD
This frothy 1950s Bollywood comedy casts three Kumars (Ashok, Kishore and Anup) as car-mechanic brothers running from amorous attachments. Plans for permanent bachelorhood are foiled when the lovely and stranded Renu (Madhubala) putters into one brother's life. The siblings come to blows over the affair until another brother's lost love is recovered after being held by the mob. Happy endings ensue after the bad guys take a beating.