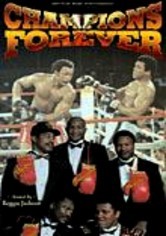 1989 NR 2h 0m DVD
For more than 20 years, Muhammad Ali, Joe Frazier, George Foreman, Larry Holmes and Ken Norton ruled the ring as they passed the world heavyweight title among themselves. Now, for the first time, they come face to face -- gloves off -- in an unprecedented video event. This documentary reveals the men behind the legends through footage, interviews and candid discussion at a dinner hosted by baseball legend Reggie Jackson.