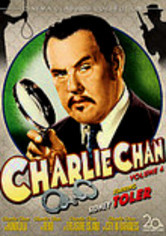 1938 NR 1h 7m DVD
Super sleuth Charlie Chan (Sidney Toler) is on the case after a murder takes place on a Hawaiian freighter docked in Honolulu. But as he tries to track the perpetrator, Chan faces challenges from his overly enthusiastic son (Layne Tom), who wants to help out. Meanwhile, the ship's captain is pressuring for a quick resolution so he can take the liner back out on the ocean. Victor Sen Yung co-stars as Charlie's second son, Jimmy.