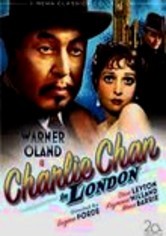 1934 NR 1h 19m DVD
Charlie Chan's (Warner Oland) pleasure trip to London turns into business when he's called upon to help clear Neil Howard (played by a young Ray Milland) of faulty murder charges. The clock is ticking, however, and Chan must follow a trail of clues -- including poisonous darts and mysterious notes -- to find the real killer amid a slew of suspects, bringing the culprit to justice before an innocent man hangs.