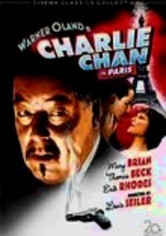 1935 NR 1h 12m DVD
Charlie Chan (Warner Oland) is back, this time accompanied by his son Lee (Keye Luke) on a covert assignment to Paris to chase down an illusive counterfeiter before his devious scam sends the whole city of Paris into a catastrophic financial panic. Father and son are pressed to solve the bond forgery scheme after the sudden death of fellow agent Nardi, and when it appears the bank president's daughter is involved.