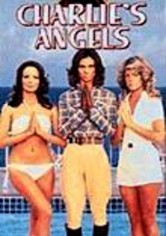 1976 NR 1h 40m DVD
Two episodes from the 1970s TV show feature the comely crime-fighting troika (Farrah Fawcett, Kate Jackson and Jaclyn Smith) in its video debut. In "To Kill an Angel," Kelly (Smith) attends the carnival and gets caught between protecting an autistic child and stopping paid killers. Then, in "Night of the Strangler," the angels go undercover as fashion models to investigate a string of killings.