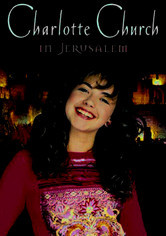 2001 NR 0h 49m DVD
Although only a teenager when she debuted on the music scene, Charlotte Church quickly established herself as one of the most stirring performers to hit a stage, armed with a voice that could move mountains. Against the backdrop of the stunning Tower of David in Jerusalem, the Welsh crooner displays her power in songs such as "La Pastorella," "Prelude" from Bizet's "Carmen," "Ave Maria," "Plaisir d"Amour," "Pie Jesu" and more.