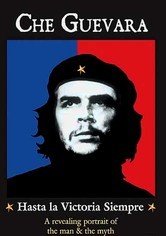 2008 NR 1h 0m DVD
The story of Ernesto Guevara de la Serna is chronicled through historic footage in this documentary, which follows the revolutionary from his early days in South and Central America to his involvement in the Cuban revolution and beyond. After participating in the Congolese guerilla war, the elusive Guevara headed to Bolivia in the late 1960s to foment an uprising. In Bolivia, Guevara was captured by a Special Forces unit and executed.