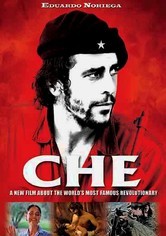 2005 R 1h 20m DVD
Eduardo Noriega stars as Ernesto "Che" Guevara in this riveting film that follows the fearless revolutionary as he takes up arms in Fidel Castro's bloody fight to overthrow Cuba's U.S.-backed government. As Che becomes a leader in guerilla warfare, his passion for social equality pushes him to the edge of brutality; his determination to purge oppression will make him a rebel to some, a hero to many and a legend to all.