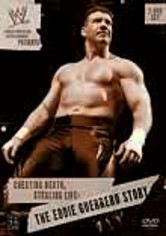 2004 NR 2 discs
This documentary series takes a close look at the life of legendary wrestler Eddie Guerrero, who became the second Latino to win the WWE Heavyweight Championship. The flamboyant Guerrero, son of the storied Mexican wrestler Gory Guerrero, made a name for himself first in Japan, then in the U.S., where he was felled by an even greater foe: drug addiction. The doc includes footage of bouts against Cactus Jack, Chris Jericho and Brock Lesnar.