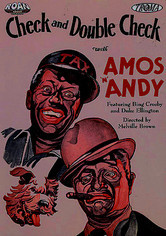 1930 NR 1h 17m DVD
Released in 1930, Check and Double Check brought America's highest-rated radio program (and the first true sitcom), "Amos 'n' Andy," to the big screen. The film follows the blackfaced Amos Jones and Andy Brown, owners of the Fresh Air Taxicab Company, as they become involved in a wealthy white couple's romance. The plot works in much of the pair's trademark banter, a haunted house sequence and early appearances by Bing Crosby and Duke Ellington.