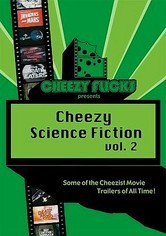 2007 NR 1h 0m DVD
Towering females and invading arachnids inhabit this collection of trailers for some of the silliest sci-fi spectaculars ever produced inside or outside of Hollywood. View trailers for such gems as The Day the Earth Stood Still, The Flesh Eaters, The Brain Eaters, The Atomic Man and Day of the Animals. Also included are Invisible Invaders, Attack of the 50 Foot Woman, Rollerball, The Giant Spider Invasion, Forbidden Planet, Future World and more.