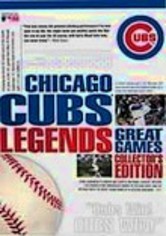 2007 NR 8 discs
Die-hard Chicago Cubs fans will revel in this retrospective collection of the team's greatest games, a series that spans more than two decades of memorable play from 1984 to 2005. Highlights include impressive action from Ryne Sandberg and Rick Sutcliffe in 1984, Kerry Wood's 20-strikeout game in 1998 and Greg Maddux's 300th victory in 2004, plus bonus footage capturing Ernie Banks's 500th home run in 1970.