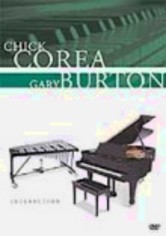 1993 NR 1h 20m DVD
Jazz musicians Chick Corea and Gary Burton achieved their worldwide acclaim the old-fashioned way: They earned every hard-blown note of it. Both have made history with their innovative music and decades of top-notch performances; as a duo, they've gigged together since 1972. On this disc, recorded from their 1997 European tour, the two jazz giants "interact" with each other -- brilliantly. Also features an interview with Corea.