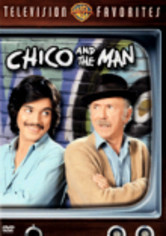 1974 NR 2h 30m DVD
This 1970s comedy broke new ground in network television by featuring a Hispanic actor -- Freddie Prinze -- in the lead (a role that made him a star). The show follows the ups and downs of two men from wildly different backgrounds as they work together in an auto shop. Fusty Irishman Ed Brown (Jack Albertson) owns the garage, while his assistant, Chico (Prinze), lives with him in a backroom. This video features six episodes from the show.