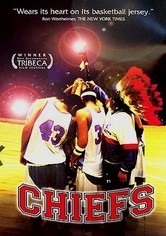 2002 NR 1h 27m DVD
Winner of the Best Documentary prize at the 2002 Tribeca Film Festival, this film chronicles the Wyoming Indian High School basketball team's efforts to become state champs while struggling with everyday life on the reservation. Following the Chiefs over a two-year period, Daniel Junge's heartwarming film captures the experience of the players who become a symbol of hope and empowerment for the residents of the Wind River Indian Reservation.