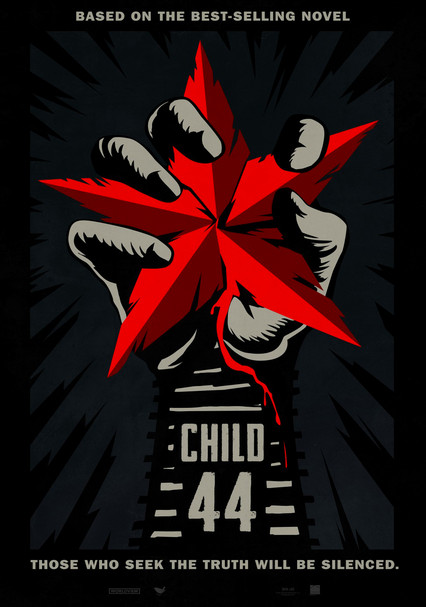 2015 R 2h 17m Blu-ray / DVD
Set in Stalinist-era Russia, this gritty drama centers on Leo Demidov, a dutiful member of the secret police who becomes a government target when he begins investigating a string of brutal child murders.

Parents need to know that Child 44 is a book-based thriller set in 1950s Soviet Russia about a disgraced secret police agent who goes hunting for a child murderer. There's lots of brutal violence, including shooting and stabbing (with accompanying blood spurts), fighting, a woman being slapped and smacked, suicide (via stepping in front of a train), self-torture, injections, and recurring images of murdered children. Many characters grew up as orphans; in one scene, children in an orphanage beat and kick another child. Characters use words including "f--k" and "s--t" frequently, and a married couple has passionless sex (nothing graphic is shown); they're also seen kissing. Characters frequently smoke cigarettes (accurate for the era), and one drinks a glass of vodka.

A married couple has passionless sex in bed; no graphic nudity. A married couple kisses. A man is shown in bed with a woman who's wearing a nightie. A secret hook-up rendezvous in the woods.

Guns and shooting. Characters are shot through the head or chest, with blood spurting. Stabbing, with lots of blood. Fighting. Bloody, bruised faces. A woman is slapped and smacked about in several scenes. Man commits suicide by stepping in front of a train. Children in an orphanage beat and kick another child. A psychotic killer gives himself water torture. Hypodermic injections of truth serum.

Though the movie is far from historically accurate, viewers may learn why the Soviet Union's post-WWII system eventually didn't work.

Characters smoke cigarettes frequently (accurate for the era). A man drinks a glass of vodka.