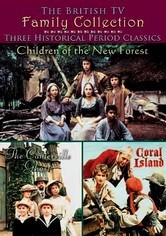 1998 NR 1h 40m DVD
When Colonel Beverly (Richard Heffer) is killed in battle during the English Civil War, his four orphaned children are driven from the family manor and forced to seek refuge with Jacob Armitage (Malcolm Storry), a skilled woodsman who teaches them to live off the land. The eldest son, Edward (Tom Wisdom), soon comes up with a risky plan to save King Charles (Michael Maloney) and find the men responsible for his father's death.