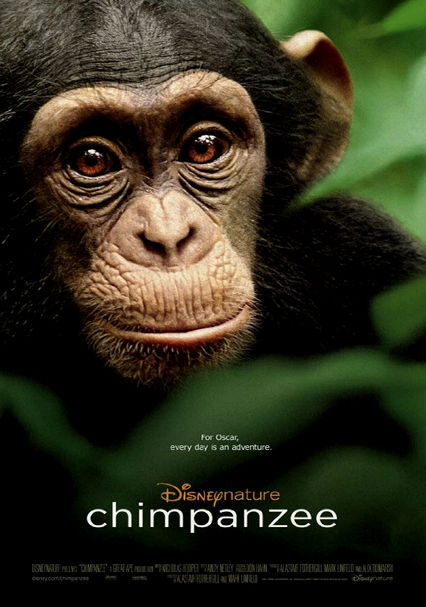 2012 G 1h 18m Blu-ray / DVD
Spinning documentary footage into family-friendly fare, this Disneynature film follows an orphaned chimp named Oscar on his quest to find a home. In the end, he finds a new family in the unlikeliest of places.

Parents need to know that Chimpanzee is a beautifully filmed, African-set nature documentary about how a chimpanzee community must defend its territory to survive. The central "character" in the story is a baby chimp named Oscar, and some children will be disturbed when a confrontation with a rival chimp clan leaves him orphaned (his mother's death is referenced several times), lonely, and desperate for affection. The violence is edited so quickly that younger viewers aren't likely to pick up on anything bloody happening, but the narrator does say when animals are killed -- including a Colobus monkey the chimpanzees hunt together. Kids interested in animals will learn about the way chimpanzees live and interact, as well as witnessing a unique relationship between a juvenile and alpha male chimp.

Some children will be upset by the scenes of suspense and peril during the various confrontations between the two chimpanzee groups. Scar and his much larger and stronger family attack Freddie, but the violence is edited quickly, so you can't really tell what's going on or which chimpanzees are injured. But the narration explains that Oscar's mother is hurt and can't get off the forest floor. Then, during a frighteningly loud thunderstorm, a leopard is shown, yells are heard, and the narration says that Oscar's mother "will never return." Her death is then referenced several times. The chimps also plan and execute a successful monkey hunt, but audiences don't see the dead animal.

The narrator says "What an idiot" in one line. "Oh my God" is said.

The message here is about how orphans need love and how an unlikely animal steps up to save an orphan from certain death. The unique relationship teaches us about how, even in the animal kingdom, a child doesn't have to be left behind just because its biological mother is gone. That said, unlike other nature documentaries, there's no call to action or conservation in Chimpanzee (although some proceeds will support the Jane Goodall Institute); it's more of a glimpse at the life of chimpanzees and how they must protect their own territories and natural resources in order to survive.