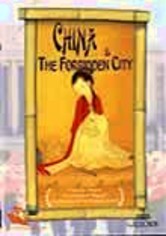 1987 NR 0h 56m DVD
Lucy Jarvis and former NBC news anchorman Edwin Newman introduce this fascinating documentary, which earned acclaim at the San Francisco Film Festival and won the Peabody Award for excellence in radio and television journalism. Jarvis, the first Westerner ever allowed to film inside Communist China, is your guide on a tour of the country's "Forbidden City," examining the opulence, grandeur and mystery of modern-day Peking.