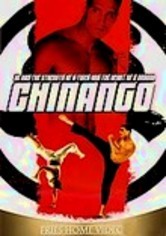 2005 NR 1h 28m DVD
Billing itself as the first Latin American martial arts film, this 2002 Chilean feature follows the adventures of photojournalist and kung fu master Braulio Bo (Marko Zaror). When Bo discovers an ancient medallion at the grave of his Shaolin monk grandfather, his already hectic life gets even more frenetic. Unaware that the medallion has secret powers, he soon finds himself pursued by mercenaries determined to nab the treasure.