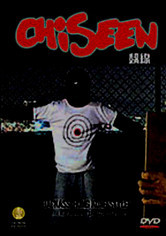 2004 NR 1h 40m DVD
With a name taken from the Chinese slang word for &NFicrazy&NFi_;, you know this variety show is anything but ordinary. Drawing inspiration from the "Jackass" stylings of Johnny Knoxville, this Hong Kong-based series that originally aired on MTV Asia features a cast of urban daredevils that pokes fun at pop culture by performing skits and stupid human tricks -- including the increasingly popular sport of wok-boarding.