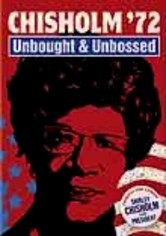 2004 NR 1h 16m DVD
Brooklyn-based Congresswoman Shirley Chisholm represented a series of firsts: She was the first African-American woman elected to Congress and the first black person and woman to run a serious, high-profile campaign in the U.S. presidential primary. She made further history when she vied for the presidency in 1972. And while her inspiring journey would have made headlines today, it was virtually ignored by the mainstream media at the time.