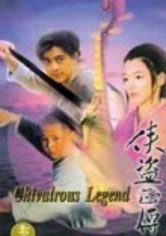 1999 NR 1h 36m DVD
After Japanese soldiers kill 12-year-old Ten-din's (Shiao Sheih Long) mother during an invasion, Ten-din must hide in order to save his own life. He takes refuge with a Peking opera company, where he perfects his fighting skills and turns into a kung fu expert. He later uses his skills to help those in need, by robbing the rich to help the poor. When Ten-din's actions are discovered, a group is sent out to intercept him and his friend Ying.