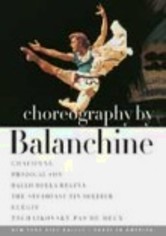 2004 NR 1h 50m DVD
Witness the magic of George Balanchine's choreography in this program that showcases the acclaimed New York City Ballet. In "Prodigal Son," Mikhail Baryshnikov and Karin Von Aroldingen interpret the Biblical story of acceptance and forgiveness. "Chaconne" boasts performances by Suzanne Farrell and Peter Martins as they bring to life the myth of Orpheus and Eurydice. Also included are "Ballo della Regina" and "The Steadfast Tin Soldier."