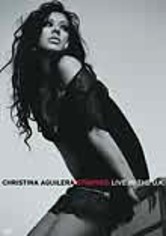 2004 NR 1h 40m DVD
Sexy songstress Christina Aguilera performs live at London's Wembley Arena in this concert video shot during the "Stripped" tour, wowing fans with hits such as "Beautiful" and "Genie in a Bottle" and the disco staple "Lady Marmalade." Other songs include "Dirrty," "Fighter," "Infatuation," "Get Mine, Get Yours," "The Voice Within" and the jazz classic "At Last." Behind-the-scenes footage provides a candid look at the blonde vixen.