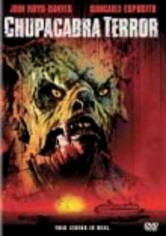 2005 R 1h 28m DVD
A zoologist (Giancarlo Esposito) finally proves the existence of Latin America's legendary man-eater, El Chupacabra, when he captures the beast, but his happiness is short-lived when the creature escapes and goes on a feeding frenzy. The scientist sneaks El Chupacabra aboard a cruise ship, where it breaks out of its cage and feasts on the sumptuous passenger-buffet. The captain (John Rhys-Davies) calls in a team of Navy SEALs to end the terror.