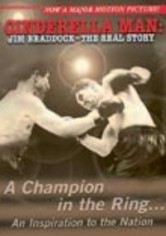 2005 NR 0h 55m DVD
Boxer Jim Braddock clawed his way up from a hard-knocks life to win the Heavyweight Champion of the World title and became an inspiring hero of the Depression Era, as revealed in this biographical documentary. From his family life to his most famous fights and inevitable retirement, Braddock's amazing underdog story is told through rare footage and interviews with famous boxers, sports commentators, referees and historians.