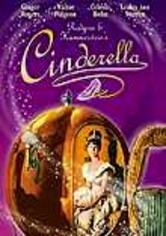 1965 G 1h 23m DVD
With the help of her fairy godmother's magic, the lovely Cinderella (Lesley Ann Warren) defies her cruel stepmother (Jo Van Fleet) and attends the royal ball. Once there, she meets -- and enchants --Prince Charming (Stuart Damon). She fears she's lost him, however, when she's forced to leave early, before the spell wears off. This made-for-TV adaptation features a marvelous Richard Rodgers and Oscar Hammerstein score and standout performances.