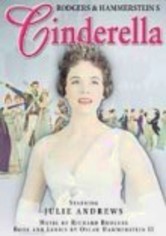 1957 NR 1h 16m DVD
Julie Andrews stars as Cinderella in Rodgers and Hammerstein's version of the famous fairy tale, which originally aired on television in 1957 to a record audience. Directed by Ralph Nelson, the production also stars Edie Adams as the fairy godmother.