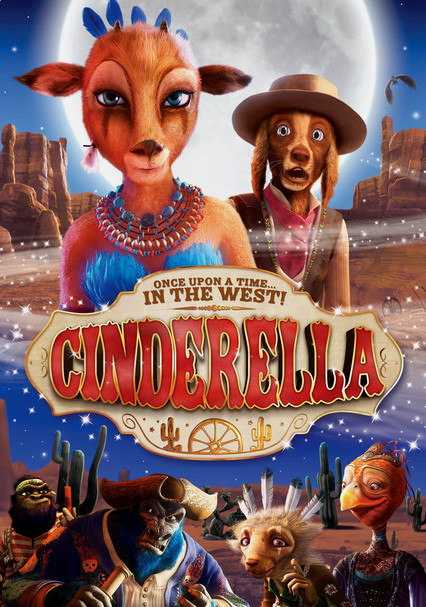 2012 PG 1h 21m DVD
When high-flying desert pirates kidnap the mother of handsome Prince Vladimir, pigtailed cowgirl Cinderella takes off on an action-packed quest to rescue the duchess, claim the missing tooth she lost at the ball, and capture the prince's heart.

Parents need to know that this animated, comic version of Cinderella is based only very loosely on the traditional fairy tale. The characters are assorted animals who play cowboys and cowgirls, pirates, and Russian royalty; there's even a spiritually guided shaman. The story takes place in the "American West" with many action sequences, battles, and slapstick fights that use an array of weapons (guns, cannons, swords). The unredeemable villains are mean-spirited, and name-calling is constant. Cinderella's time-honored plight at the whim of her stepmother and stepsisters loses center stage to kidnapping, piracy on desert sands, and mustache-twirling villains. An English-language version of a French film.

Female characters are drawn with accentuated breasts, curves. A kiss.

Cartoon action throughout. Two villainous characters continually punch, whip, kick, and knock out both their accomplices and their enemies. There are several battles that use gunfire, cannons, swords, dynamite, knives, and fists. Several characters are kidnapped and held in captivity, where they're hung upside down by a rope for a period of time. A train is robbed with guns blasting. A buckboard goes over a cliff. A villain sinks to her death in quicksand. A ship catches fire and appears to trap those on-board.

Mean insults are frequent: "imbecile," "ungrateful little wretch," "useless idiot," "good-for-nothing," "you bugs," "dummies," "lazy," "stupid," and many more. A threat is issued: "I'll scratch your eyes out and cut off your legs."

A saloon scene shows numerous characters toasting and drinking; however, the beverages are not identified. One scene has a smoker.