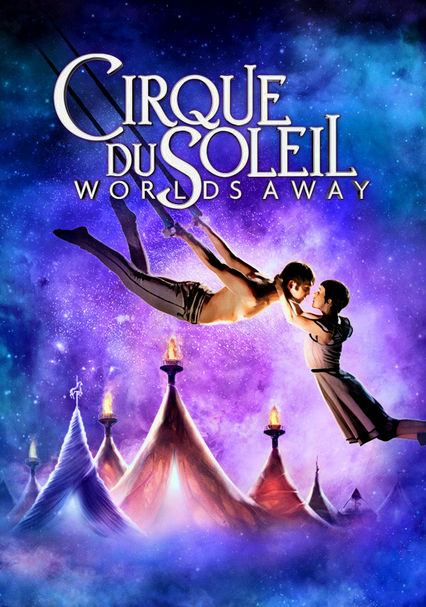 2012 PG 1h 31m Blu-ray / DVD
This family-friendly fantasy intertwines magnificent artistic and acrobatic performances from some of Cirque du Soleil's inventive shows -- including "Ka" and "O" -- to create a new story that takes viewers into a beautiful, imaginative world.

Parents need to know that Cirque du Soleil: Worlds Away isn't a documentary about the inner workings of Cirque performers but rather a 90-minute performance (with a framing story) featuring 3-D segments from most of the company's popular Las Vegas shows. There's little dialogue, and many of the performances are high-concept, death-defying acrobatic stunts. Some of the pieces include a bit of violence (all simulated, obviously, but they do include weapons such as spears and arrows), and a couple are focused on romance and sensuality -- especially the performance from the Cirque's "adult" show, Zumanity (which centers on a woman in a very sheer leotard), and the climactic lovers' duet.

Some scenes/pieces are sensual and even titillating. One of the performances is from the "adult" Cirque show, Zumanity, and features a woman dressed in a very sheer leotard dancing in and out of a fishbowl of water in a possibly provocative manner. The final aerial duet is beautiful, flirtatious, and very romantic; it ends in a kiss.

Mild simulated violence with spears and arrows in a couple of the film's set pieces.

There's barely any dialogue in the film, and none of it is strong language.

The only theoretical "message" is that if you're meant to be with someone, no obstacle is too great to overcome.

While it offers an entertaining look at various Cirque shows, the film could also be perceived as a 91-minute commercial for Cirque du Soleil's various high-concept shows, primarily the ones in Las Vegas. Some segments feature music from popular artists like Elvis and the Beatles.