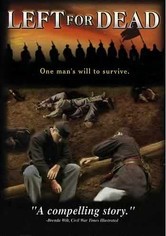 2002 NR 0h 50m DVD
"Civil War Life" is a six-part series that examines the American Civil War from an insider's point of view, with first-person accounts and never-before-seen period photos. "Left for Dead" tells the story of Ohio schoolteacher Oscar L. Jackson, who formed his own regiment and was engaged in some of the bloodiest battles of the Civil War -- only to be shot in the face and left for dead.