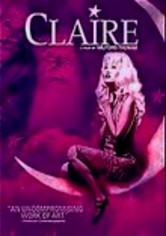 2001 NR 0h 55m DVD
A homosexual couple (Mish P. DeLight and James Ferguson) who yearn for a child of their own in the 1920s South are delighted to discover that a baby is growing from an ear of corn in their barn. Toniet Gallego co-stars as the couple's newborn baby, a silver-haired girl they name Claire. In his debut feature, director Milford Thomas uses period techniques -- such as the use of a hand-cranked 35mm camera -- to mimic the look of early silent films.