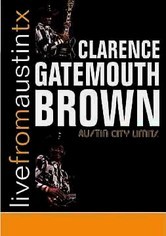 1996 NR 1h 5m DVD
Blending influences from his Louisiana and Texas roots to create a sound uniquely his own, Clarence "Gatemouth" Brown brings his brand of blues to this 1996 live performance that first aired as part of the PBS series "Austin City Limits." Tracks include "Ain't That Dandy," "Born in Louisiana," "Bits and Pieces," "Honky-Tonk," "Dark End of the Hallway," "Up Jumped the Devil" and more.