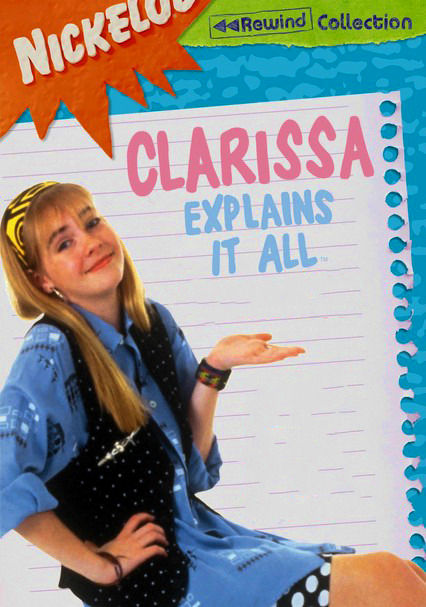 1991 TV-Y 1 season
Melissa Joan Hart stars as the explainer -- Clarissa -- in this beloved Nickelodeon sitcom in which the title character regularly talks directly to the camera about her teenage angst and adventures, which typically include her best friend, Sam.

This Nickelodeon classic stars Melissa Joan Hart as a charming but often befuddled teenager who tries to make sense out of the nonsense of her daily existence. Exacerbating things are her mischievous brother, by-the-book dad and fitness-fanatic mom.

Parents need to know that despite being fairly dated, this likable '90s sitcom has a lot of appeal for today's tweens and their parents. It centers on a down-to-earth teen whose daily conundrums involve relationships with her family (including her pesky brother), the woes of dating, and the many complicated situations in which she finds herself, all of which yield positive learning experiences with wholesome morals about friendship, trust, and honesty. Clarissa draws emotional strength and a sense of identity from her tight-knit family, and her parents encourage her independence while remaining accessible if she needs advice. The show was an anomaly during its original run because it cast a close boy/girl friendship that wasn't hampered by sexual attraction, which offers parents a good opportunity to talk about social dynamics and dating with their tweens.

Some storylines center on dating and teen crushes, and there are some references to sex. Clarissa's best friend is a boy who's often seen in her bedroom, but their relationship is purely platonic. There's occasional mention of bras and lingerie.

Occasional use of "hell," and Clarissa and her brother sometimes call each other names like "fungus face" and "weasel."

Viewers see a teen cope with everyday challenges like balancing family and social obligations, managing self-expression within parental guidelines, and dealing with a bully. The show's unique style allows Clarissa to speak directly to the audience, which makes viewers a part of the process of learning the lesson in each story.

Occasional mention of smoking and drinking, but it's not shown.