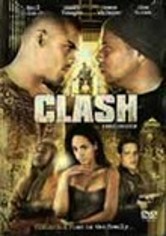 2006 NR 1h 28m DVD
Revenge fuels this tale of racially charged violence between Latinos and African-Americans. After drug dealer Hector Pinero (Daniel Venegas) ends up in a wheelchair as the result of a gunshot wound, things go from bad to worse when a crooked cop (Damon Whitaker) kills his father. Vowing to get revenge, Pinero instead winds up in prison. Now, on the eve of his release, he must decide whether to continue his quest or put the past behind him.