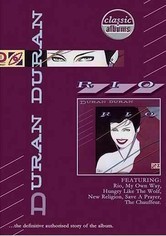 2008 NR 2h 7m DVD
Duran Duran celebrates their seminal second album, 1982's "Rio," with this retrospective and performance film. The band discusses the impact of the "Rio" on their rocket ride to success and the album's enduring pop music legacy. Videos, including "Hungry Like the Wolf" and the notorious clip for the title track, accompany live footage filmed exclusively for this release that features "The Chauffeur," "New Religion" and other hits.