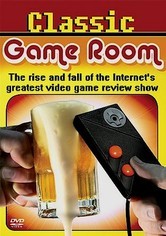 2007 NR 1h 40m DVD
In 1999, the first online video game show was inaugurated with a single camera, a $50 per episode budget and a pair of hosts who weren't above swilling beer and slinging joysticks to inject some fun. This film documents the short-lived show's rise and fall, and includes Mark Bussler's and David Crosson's reviews of classic games such as Frogger, Duck Hunt, SeaMan, Yars' Revenge, Alien, Joust and more.