Classic Superstars of Wrestling: Champions of the Squared Circle 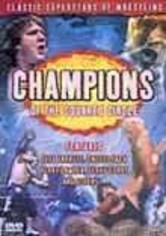 Classic Superstars of Wrestling: Champions of the Squared Circle

2003 NR 0h 56m DVD
Witness exciting matches featuring some of the greatest wrestlers of all time with this action-packed collection. The thrills are fast and furious as Jerry Lynn goes up against The Lightning Kid, and champions Jeff Jarrett and Matt Borne battle Cactus Jack and Sheik Braddock. Other matches include Eddie Gilbert vs. Sam Houston; Jerry Lawler vs. Terry Gordy; Jack Victory and John Tatum vs. The Masked Men; Debbie Combs vs. Rockin' Robin; and more.