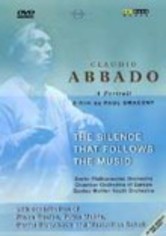 1996 NR 1h 0m DVD
When he assumed the baton of the Berlin Philharmonic in 1989 as successor to Herbert von Karajan, Claudio Abbado had big shoes to fill. In this intimate documentary by Paul Smaczny, Abbado is revealed to be a man more than up to the challenge. Noted colleagues and musicians such as Zubin Mehta, Pierre Boulez and Daniel Barenboim discuss Abbado's work, as candid footage captures the maestro in rehearsal with the orchestras he's conducted.