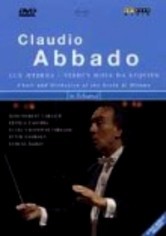 1985 NR 1h 59m DVD
Get an insider's glimpse of the preparation of Claudio Abbado's arresting performance of Verdi's "Missa da Requiem" in this behind-the-scenes documentary showcasing the acclaimed conductor as he rehearses with the production's various performers. Featuring the Orchestra and Chorus of La Scala Milan, this revealing program compiles rehearsal footage captured at the Chiesa di San Marco in Milan and the Teatro alla Scala opera house.