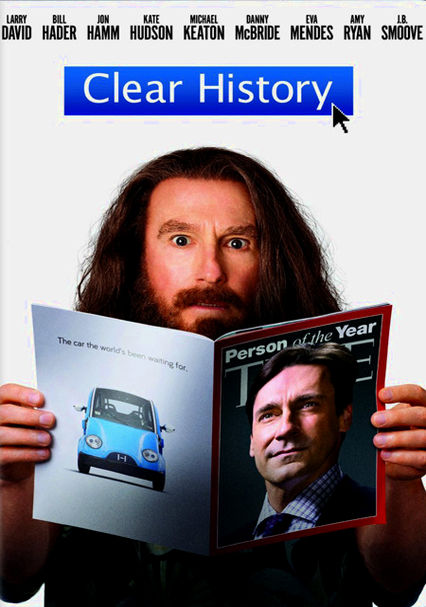 2013 TV-MA 1h 40m Blu-ray / DVD
Ten years after a business disaster leads him to change his name and go into island exile, Nathan Flomm is drawn back into his bitter past. When his former boss appears on the isle to renovate his vacation home, Nathan vows dark revenge.

Parents need to know that Clear History is clearly aimed at adults, with subtle humor that's not likely to interest most kids. But if they do watch, they'll hear unbleeped streams of salty language (with words ranging from "motherf--ker" to "c--ksucker") and some sexually charged jokes about blow jobs and prison rape. Violence is limited to an explosion and a minimally bloody motorcycle accident, and characters drink socially in bars.

Sexual humor includes jokes about oral sex (like a running gag about female characters who "blew [the band] Chicago").

Two characters get in a motorcycle accident, and there's a little blood. There's an explosion, too, but no one gets hurt. Jokes about prison rape.

Revenge is a major theme -- along with selfishness and self-absorption -- but the main character pays for his mistakes in the end.

Some familiar name brands -- including Enron and Edible Arrangements -- are mentioned.

Social drinking in bars, mostly in the background.