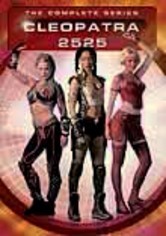 2000 NR 5 discs
Cryogenically frozen since 2001, exotic dancer Cleopatra (Jennifer Sky) emerges from her icy cocoon in the 26th century to find an army of malevolent robots in command of the planet and humans banished to a subterranean existence. Joining forces with her liberators -- distaff resistance fighters Helen (Gina Torres) and Sarge (Victoria Pratt) -- Cleo helps lead the battle to reclaim Earth in this sci-fi action series.