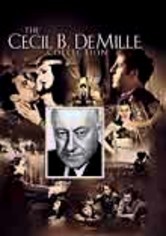 1934 NR 1h 42m DVD
Legendary director Cecil B. DeMille helms this spectacle about ancient Egypt, with Claudette Colbert as the queen of the Nile and Warren William and Henry Wilcoxon in the roles of Julius Caesar and Marc Antony, respectively. The sumptuous sets and thrilling battle scenes helped make the film an event, and Cleopatra's seduction of Marc Antony on her lavish barge ranks as a must-see moment in the world of cinema. The film won an Oscar for editing.