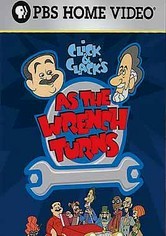 2008 TV-PG 2 discs
In this offbeat series from PBS, NPR radio personalities Tom and Ray Magliozzi lend their voices to their animated counterparts Click and Clack Tappet, two work-shy brothers who dish out automotive advice over the airwaves. More concerned with conserving their precious energy than running a successful garage or hosting a popular radio show, the duo cooks up increasingly elaborate schemes in pursuit of leisure.

Parents need to know that although this animated comedy doesn't have any swearing, nudity, drinking, or other iffy stuff that would make it inappropriate for kids, the jokes and political themes are all aimed at older viewers. Which makes sense, as they're the ones who are most likely familiar with stars Tom and Ray Magliozzi's popular NPR radio show "Car Talk." Despite surface similarities (left-wing politics, good-natured teasing, etc.), this series is actually quite different from that one, focusing on the brothers' (fictional) antics rather than on actual auto maintenance.

No sex or nudity, though Click and Clack do sometimes have daydreams featuring bikini-clad cartoon beauties. Some innuendo; one episode structures a joke around a man wanting to see something that a woman has hidden -- the implication is that it's her breasts, but it's really a necklace.

The characters are sometimes pretty rough with the cars they're fixing, but there's little violence.

Though Click, Clack, and the unusual characters who work in their garage all seem to have their hearts in the right place, they're also quite subversive and are often willing to bend or break the rules to achieve their goals. The show's laughs result from the unusual means they use to that end. Their harebrained schemes are also written to highlight social issues, as Click and Clack take advantage of various loopholes and flaws in modern society.

The series showcases the talents of Tom and Ray Magliozzi, the well-known hosts of the popular radio series "Car Talk," and there are frequent references to National Public Radio.